How Much Memory is Required to run US3D?

The amount of memory that is required to run US3D varies depending on a lot of different factors including such things as:

In order to test memory usage, we ran a number of cases using a simple box grid created with the built-in SIMPLE_GRIDS module giving all-hex grids. The number of grid points in each i,j,k direction was varied to give a grid of the desired size. A single wall zone was used with a line length of 150, and implicit DPLR time integration (impl=1) for the first two tests. Decoupled chemistry with line integration was also tested. The flow was set to laminar with chemistry and vibration turned off, but chemistry and vibration on or off does not generally affect memory usage. All other parameters were left at the typical default values.

The solver was run on a single 64-core AMD-based node using 64 processors for each test. The node had 256GB of RAM and baseline memory usage without US3D running was approximately 630MB. Memory used during the solver run was recorded and the baseline OS memory usage was subtracted to obtain the amount of memory required for the solver to run.

Memory usage (in GB) for US3D for different numbers of cells (in millions) and different gas models, running in either fully-coupled or decoupled mode. 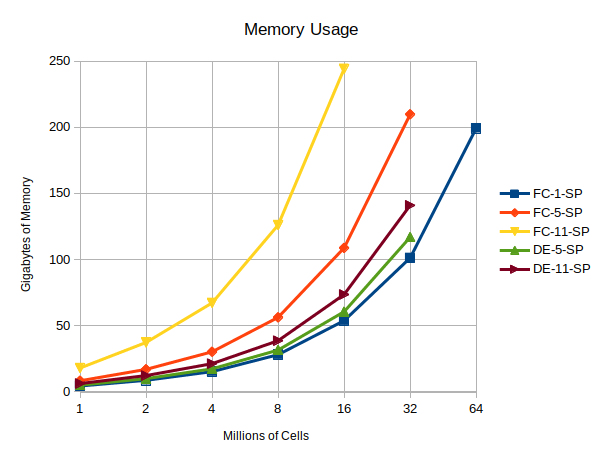